The story of the local honey starts with a beekeeper in Scotland named Paul. He had a thriving business cultivating sweet heather honey in the moorlands. He was a happy family man with a young daughter and a loving wife. This must have been sometime around 1850 or 1851, just a few years after the horrible cholera epidemic struck Glasgow and many fearful Scots fled the major population centers.

Paul was visited one day by a Yemeni trader who carried a large trunk of fine silk with him, along with a small lock box. The trader demanded an obscene amount of local honey from the keeper, who set about trying to fill the order as best he could. The trader lavished the beekeeper and his family with silk and took up lodging in a nearby inn and sat by the window, night after night, with an odd gleam in his eye, and rapping his fingers up and down across the lockbox.

Paul did his best to cultivate the honey, but after a while, it became clear that he couldn't fill the orders of his friends and that of the trader. So, silk in hand, he visited the trader and the inn and broke the bad news.

"I'm sorry," he said mournfully. "But I just cannot fill yer order of the heather hoh-ney in time for the harvest. I know there's a ship coming soon tah take you home. Would you consider a smaller order?"

The trader responded by presenting, in turn, his best argument against the keeper's request. After this exchange, Paul made himself scarce. It seems he, at least according to his new partner, the trader, became convinced that he could explore the world in search of even better honey, which he would then import. Over time, the imported Yemeni Sidr honey began flowing in, and the local honey was all but forgotten. The townspeople didn't figure that their beekeeper would have left without saying goodbye to them or his family, but even the keenest ears and eyes felt the trader was telling the absolute truth when he swore that their once beloved local honey purveyor was now on Yemeni soil.

The beekeeper's family didn't know what to do. His wife and daughter took up residence in a nearby palace and were not seen for a very long time. It was said they were in mourning, and for them, tasting of honey became like tasting sadness. One morning, some poor servant carelessly spread thick honey slabs across their morning biscuits and was promptly executed.

Within a year, Sidr Honey become a staple in all the townships in the Scottish realm. The pretty purple heather, once the a symbol of the great local honey harvest, was soon just a sad vestige from another era. An epidemic of sneezing and hay fever soon took hold in all the locals, and soon spread to the palace. It was nothing nearly as serious as the Glasgow epidemic years prior, but it really annoyed the locals. They sneezed and sniffled so much that their productivity lagged. They sneezed in church. They sneezed on produce they were trying to sell. They sneezed into their ale. None of them realized it at the time, but the local honey had, up until that point, kept them safe from all that.

The trader didn't really care either way. Thanks to shipments coming in, ostensibly from his turncoat beekeeper partner in Yemen, he grew richer than ever, and his luck might have continued, were it not for a visiting band of gypsies from the South who passed through the realm having heard of the fantastical qualities of local honey. The stories they heard were many years old, probably passed along from another nomadic group that had passed through the area years before.

The gypsies felt gypped. They were incensed to find that the honey, while exhibiting a kingly flavor, was of the Yemeni Sidr variety. The legendary sweet heather honey of the Scottish moors was ... no moor.  Fortunately, Gypsies were not held down by local custom, and they soon shook the Yemeni trader, now in his 60s, to admit the truth of what had happened.

It was revealed that on that fateful night, the last time Paul was seen on Scottish soil, the two men were had a discussion which did not end well for the beekeeper. The trader, if you recall, was told that his order was too big. His lock-box disagreed, for it contained a single item that shifted the course of the local honey trade.

As Paul gently tried to talk the trader down, the proud Yemeni stood statue-still, hands behind his back, nodding. A razor grin grew on his face. His hands, out of view from the keeper, quietly shook the lock box with a deadly intensity. At the moment Paul held out his hand in fraternity, the trader knocked the box open and pushed it out upon the beekeeper, who became paralyzed after one sting from the rare bee. He pushed the body inside the large trunk, surrounded by silks, and had it shipped overseas.

The matter of the beekeeper being on Yemeni soil was true. Paul was, in fact, on Yemeni soil, and had been struggling to get back to his homeland for some time. The problem was, the trader was bribing officials to keep Paul in the country, and simply importing the Sidr honey himself, under the guise of the now incapacitated beekeeper, under the noses of the customs officials and the magistrates in both countries.

The typically stateless gypsies were, upon hearing this story, imbued with an unusual sense of local duty. Once the trader had been dealt with, they stayed in the area much longer than was typical for them. They set about getting all the papers together for Paul's safe return. They took it upon themselves to cultivate the local heather honey again, as the beekeeper had done years before. They even named it after him.

On the day the humble beekeeper stepped off the boat, his eyes welled up with tears, and he fell to his knees, kissing the soil. His wife and daughter, now considerably older but still very beautiful, presented him with the family crest. That night, the gypsies, who were packing up to leave, held a great local honey festival in Paul's honor. The beekeeper was thereby restored to his rightful place, and his wife and daughter grew to love honey again. Last but not least, the allergy epidemic again ceased, and the locals' sniffling and coughing stopped.
Email Post
Labels: fiction 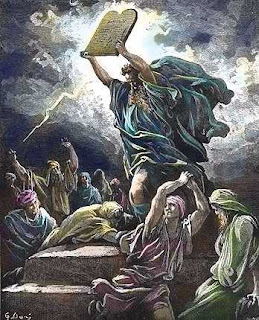